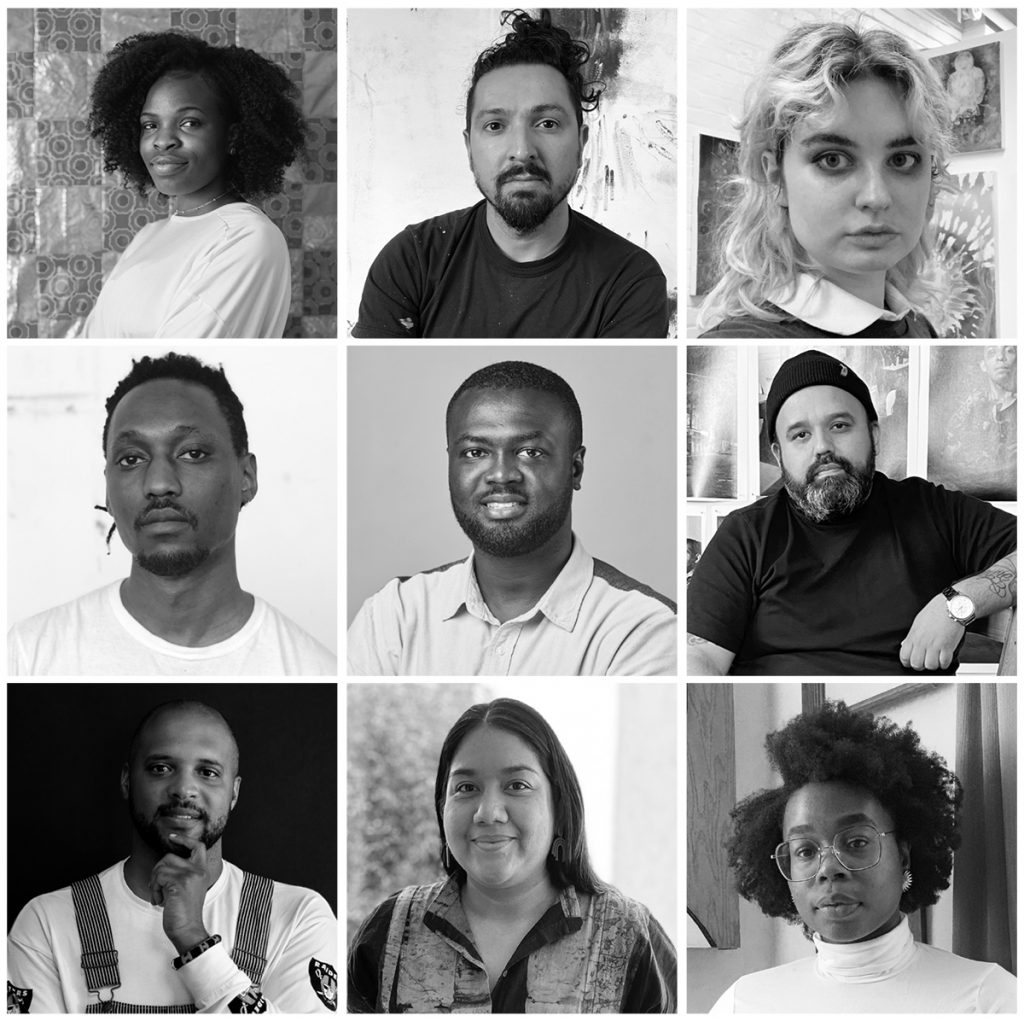 Embarking on its third year of fellowships, NXTHVN received over 325 applications from across the globe for its Studio and Curatorial programs.

Layo Bright was born and raised in Lagos, Nigeria and is currently based in Brooklyn, New York. Her works explore themes of migration, inheritance, legacy and identity through portraits, textiles, and mixed media. Her works have been included in several exhibitions nationally and internationally, including Monique Meloche Gallery, Chicago, IL; Welancora Gallery, Brooklyn, NY; Anthony Gallery, Chicago, IL; Parts & Labor, Beacon, NY; Meyerhoff Gallery at Maryland Institute College of Art, MD; among others. She received her MFA in Fine Art (Hons.) from the Parsons School of Design (2018) and is the recipient of honors and awards including the UrbanGlass Scholarship Award.

John Guzman is a painter from San Antonio, Texas. He works with large-scale abstract figurative oil paintings that are responsive to his surroundings and the impact of him dealing with people living a self destructive lifestyle. His work uses deconstructed elements of the body to interpret the mental and physical deterioration witnessed throughout the course of their struggle. He sees his work as a form of documentation, the effect made on his individual character that contributes to his imagery. His figures are often positioned within domestic architecture, confined to inform the inextricable links between the environment and its inhabitants. John has exhibited throughout San Antonio and completed his formal training at the Southwest School of Art in 2019. His 2020 solo exhibit receives a Contemporary Art Month Award presented by Blue Star Contemporary in San Antonio. John has a forthcoming solo exhibition, I Would Have Killed To Seen It, that opens July 2021 at Presa House Gallery in San Antonio, TX.

Alyssa Klauer is a painter based in Brooklyn, NY. She received her BFA from the Maryland Institute College of Art in 2017 and her MFA from the Cranbrook Academy of Art in 2019. Klauer has been awarded residencies at the Vermont Studio Center, Grin City Collective, Chautauqua School of Art, NYU Steinhardt, and Palazzo Monti. Her work has been featured in Burnaway and New American Paintings. She has exhibited nationally at Steven Zevitas Gallery, 5-50 Gallery, Olympia Gallery, Baby Blue Gallery, Trestle Gallery, and the Spring/Break Art Show, amongst others.

Africanus Okokon works with the moving image, performance, painting, assemblage, collage, sound and installation to explore the dialectics of forgetting and remembrance in relation to cultural, shared and personal mediated histories. His interdisciplinary practice deals with loss, the assumed truth of the recorded document, and the moral function of memory. He received a BFA in Film/Animation/Video from the Rhode Island School of Design (RISD) in 2013 and an MFA in Painting/Printmaking from Yale University in 2020.

Patrick Quarm is a painter coming to NXTHVN from his home in Ghana. He employs a juxtaposition of the traditional Western style of painting with African print fabrics as a metaphor to engage the dialogue of cultural hybridity, to compose an imagery that references the merging point of both cultures, and further question what is true or false within the contemporary Ghanaian cultural third space.

Early on in his career, Daniel Ramos decided that the people in his life—family, friends, coworkers—would be the subjects of his work. He uses photography as a vehicle to amplify their presence in the world and has recently began moving beyond the single image convention of picture making to create 3-dimensional sculptures, large-scale collages, and mixed media installations. Daniel was an Artist-In-Residence at Light Work, Syracuse, NY in June 2021 and recently completed the 2020-2021 Pollock-Krasner Residency at ISCP in Brooklyn, NY. In March 2020, Daniel completed the Spring International Artist-In-Residence program at Artpace San Antonio, Texas and won the Dorothea Lange-Paul Taylor prize in 2018.

Warith Taha is a visual artist from Oakland, CA coming to NXTHVN from Sausalito, CA. Deeply inspired by his mother, Warith’s practice draws from a diverse field of research ranging from abstraction to 90’s Black Inches Magazines, family photos to found domestic objects, self-portraiture to autobiography. These points of interest become anchors in an ongoing autobiographical exploration which often touches on his relationship to American history, race, gender, sexuality and class. Warith received a BA in Sociology from Boston College in 2009 and an MFA in Painting from Tyler School of Art and Architecture in 2020.

Marissa Del Toro is an independent curator and art historian of contemporary and modern art of the Americas (primarily Latin America and the US). In both her professional and personal life, she continues to work towards the promotion and advocacy for diverse narratives within art.

Del Toro has worked at Phoenix Art Museum, Santa Barbara Museum of Art, Getty Research Institute, UTSA Art Gallery, and the Smithsonian Latino Center. She graduated from the University of Texas at San Antonio with her MA in Art History and is originally from Southern California, where she attended the University of California, Riverside.

Jamillah Hinson is an independent curator and arts programmer. Hinson’s work often delves into the everyday life of Black people across various cultures and ethnicities, examining and glamorizing often erased components of Blackness in the Americas and the Caribbean. With a focus on historical and contemporary Black mysticism and spirituality, her practice engages various methods of storytelling, examines traditions rooted in both terrestrial and cosmic spaces, and centers artistic and community narratives.

Hinson has curated shows and developed programming with The Center for Afrofuturist Studies, LATITUDE Chicago, Intuit: The Center for Intuitive & Outsider Art, and the Chicago Artists Coalition, along with other arts and cultural spaces. Hinson holds a BA in Art History.

Support for NXTHVN’s Curatorial Fellowships is provided in part by a grant from The Andrew W. Mellon Foundation. Each year, three Studio Fellowships are supported by the TOY family in memory of Yves (1988–2011). NXTHVN’s programs are made