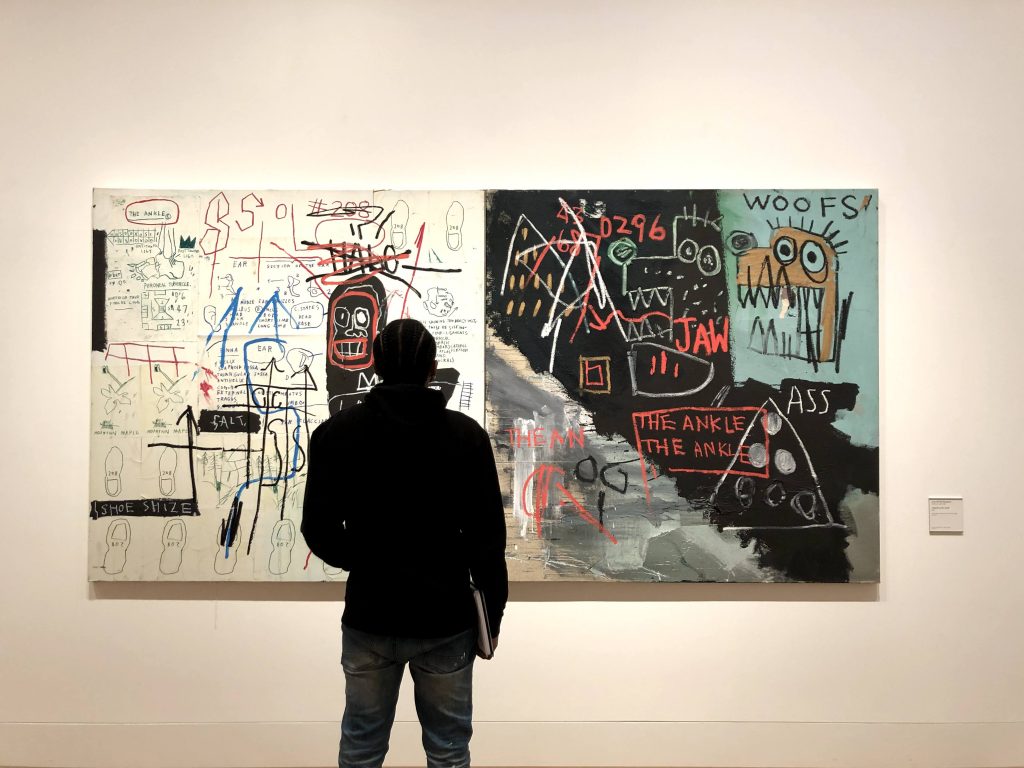 While walking in the contemporary art section of the Yale University Art Gallery, I was instantly drawn to a particular painting by Jean-Michel Basquiat: a diptych entitled, “Diagram of the Ankle (The Ankle).” The two images are bound with hinges and form a 60-by-120-inch masterpiece that depicts a canvas filled with creations made by oil sticks, acrylics, and xeroxed paper. This piece was created in 1982, when Basquiat was 22 years old. During this time, he had begun transitioning from wall tagging messages under his alias “SAMO,” which meant “same old, same old” or “same old shit” into the renown artist he is known to be today. The markings in “Diagram of the Ankle” resemble graffiti which invokes a sense of familiarity and drew me to the painting. It reminded me of the graffiti and street tags painted on the walls of the neighborhoods in New Haven I grew up in. Basquiat was an artistic activist who created abstract masterpieces that disrupted the standards of the art world; his distinct style was simple, yet complex. In his self-titled biopic, when advertising his art to Andy Warhol, Basquiat’s character refers to the piece as “shit art.” His work can be described as “shit art” because to an average viewer his work may look like scribbles with no meaning, but the scribbles’ meaning serves no meaning other than to challenge what meaning is. To this day Basquiat’s contributions to art still draws people together to discuss the true motives behind his paintings. When analyzing Basquiat’s work, I asked myself two questions: What is the meaning behind these paintings? Should we solely enjoy the emotions we have when seeing his work at face value?

“Diagram of the Ankle” resides within the Yale University Art Gallery, surrounded by phenomenal works of art by artists such as Titus Kaphar, Andy Warhol, a close friend and mentor to Basquiat, and Roy Lichtenstein. Basquiat worked with spontaneity, saying he would convey what’s going on through his mind at the time of painting. He said, “When I’m working I hear them, you know, and I just throw them down.” This is apparent in “Diagram of the Ankle,” where clear bursts of sporadic creativity can be seen in choices in motifs and lettering. In the middle of the right side of the painting, Basquiat places red lettering that states, “THE AN,” an unfinished “The Ankle.” Besides that is black lettering that appears to say “OG” atop of gray paint. These letterings don’t have any clear meaning to the viewer, but during Basquiat’s process,  they were relevant enough to be included. In the left panel, there are a bunch of sporadic creations that fill the canvas. A lot of these creations are eccentric and very noticeable at first glance and usually involve a lot of random directional lines. Near some of these sporadic creations is a diagonally cut painting of a paper depicting a diagram of a functioning heart with a green caption that resembles a medical book saying “FIG 11. Showing tendency-”. Under that, another diagonally cut paper, this one filled with blue markings. In the middle of the painting, there is an unfolded paper with darkish blue markings describing sections of an ear. Basquiat was known to paint with the TV on, with many medical books open while working. He was easily influenced to paint whatever he liked or disliked. When going to art museums, Basquiat recalls, “We would take out drawing pads and walk around making sketches of stuff that we thought was cool” (Source: Artsy).

Basquiat used distinct colors throughout the painting in various sections. These colors are used in figures that are painted to jump out to us as soon as we see them. On the right side of the painting are red numbers and white lines, whereas, on the left side of the painting there is a bright blue arrow drawn squiggly.  This arrow finds the viewer’s attention by being directly in the middle accompanied by two bright and expressive red marks that streaks across both sides of the image. The streaks of red paint give off a rugged chalk feeling when analyzed up close. There is an abundance of black paint that fills the top left corner of the right painting unrefined all the way down to the bottom right where it screeches to a halt before it meets the corner. Present in the top right corner is mint green which, unlike the black paint, is refined along the corner and left-side edge. One main focus throughout the entire painting is the red paint and how it’s spread out in a way that makes your eyes dart to different positions on the canvas while still being contrasted by the other colors.

The left panel is more condensed and focused, while the right side is spread out and spacious, forming a juxtaposition. This left panel is filled with many smaller painted pictures of multiple ankles and diagrams from medical books that were cut and plastered on. There are two papers with imprinted leaves on each labeled “Mountain Maple.” Under that are two papers with imprints of shoes, these labeled “208” and the phrase “SHOE SHIZE.” Aligning the bottom of the painting are seven of these individual shoe imprint papers that are flipped upside down with two more at the top, eleven in total.

On the right panel, there is a lot of open space compared to the left side, but the images within that space are large in size. Black paint appears to have been placed so fiercely that there is gunk hanging off of the image. The markings in the top left corner of the right image cover ragged edged black paint that starts from the top left of the right side of the painting, then flows diagonally across the middle towards the bottom right. Basquiat leaves a lot of breathing room for the viewer to linger while analyzing this side of the canvas. Rather than looking around and searching for every little detail, you’re drawn to take in as much details as you can.

Basquiat also added characters that are enormous with very disproportionate facial features. In the right image there is a doglike character labeled with the name “WOOFS.” Its teeth are big, sharp and drawn out of control. The nose is scribbled in black paint using circular motions, a technique that is also used to paint the eyes. Woofs closely resembles what a child would make while being bored inside of a classroom. In the middle of the left side of the painting there is another character, with the word “LARYNX” inside of it. This one is painted atop other plastered paper on the left side of the canvas. “LARYNX” is written on all black figure with a red outline for a face, a clobbered nose and red lips. These are features the media portrayed on black people in film and animation decades ago. Above the character there is the word “HALO” that’s been crossed out in black, then scribbled over in red which gives us the feeling this character should not be viewed as an angel. The right side of the painting can be looked at like a children’s notebook filled with doodles, while the left side’s layout resembles an adult frantically drawing in their notebook.

A prominent figure in pop culture, Basquiat is beloved by many for his style of art, and the abstract ways he presented his ideas onto canvas. Basquiat was rarely interviewed but, every time he was, his responses were more questions than answers. Basquiat famously said, “I don’t think about art while I work, I think about life” (Source: Artsy). Numerous figures in hip hop have come to highlight his excellence, such as Jay-Z, J. Cole, Swizz Beats, Rick Ross. In a song named “Most Kingz” released in 2010, Jay-Z describes how he is inspired by Basquiat’s influence and uses a double meaning in the line, “Inspired by Basquiat, my chariot’s on fire / Everybody took shots, hit my body up, I’m tired.” Basquiat had a painting entitled “Charles the First” that includes the line “most young kings get their head cut off,” which Jay-Z stated was an inspiration for the entire record. The next line would go over most people’s heads as he uses a double entendre saying “Everybody took shots, hit my body up, I’m tired.” While unfortunately people did shoot at Jay-Z, the word “shots” can also be used as a reference for heroin needles, the drug that killed Basquiat at the age of 27.

Another reference of Basquiat in hip hop is in J. Cole’s “Rich Niggaz.” J. Cole says, “I took a train down memory lane and watched little Jermaine do his thing before he made a name. It’s like Sony signed Basquiat, he gave it all he got, and now a n—- don’t paint the same, damn.” J. Cole references how he is similar to Basquiat in his artistic upbringing while he reflects on his struggles coming up in the rap game and how his involvement with the industry changed the way he sounded during his humble beginnings. This is similar to Basquiat’s philosophy towards the art industry; he preferred to distance himself from it in order to satirize it. Basquiat’s involvement in the art industry, or the lack thereof, is what made his style so appealing: it was brilliantly unconventional, dissonant and deeply thoughtful. Much like how J. Cole mentioned his involvement with the music industry changed his sound, Basquiat saw how drawing and painting with a purpose to serve someone else’s vision stripped artists of their creativity, causing the art to lose its artistic value.

One of the main things Basquiat strived for was to chastise and create parodies of the art market and institutions. Growing up, Basquiat didn’t go to traditional art school, but he did frequent galleries with his friend Al Diaz. During this time they would use the alias “SAMO” to tag New York streets with messages that resented capitalism and industrialization. It’s this mindset that helped him develop his unique style for being abstract and incorporating messages about society. Basquiat was able to take a topic or an issue and be able to flip the analysis of it in a way that had not been done yet. He disrupted what was so beautiful in the institution, the fact that everything was polished, concise and direct; he challenged that and made his work rugged, messy, and ambiguous. Basquiat’s shit art became beautiful, and it tested the times.

Justin Threet is a NXTHVN Curatorial Apprentice, poet, and graduate of Career High School, Class of 2020.